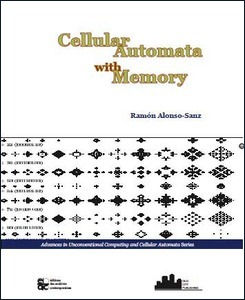 Cellular Automata with Memory demonstrates that cellular automata with memory are not only priceless tools for modeling of natural phenomena but unique mathematical and aesthetic objects. Cellular Automata with Memory revolutionizes the conventional view on cellular automaton evolution by allowing cells to update their states by looking at past states of their neighbors and analyzes the effect of memory on a wide range of spatialized discrete dynamical systems scenarios.

Ramon Alonso-Sanz is a Senior Lecturer in Statistics and Operational Research in the Polytechnic University of Madrid (UPM), Spain. He has extensive experience teaching Mathematics, Statistics, Operational Research and, more recently, Cellular Automata to students at UPM. He has been a member of the research Group of Complex Systems of UPM since its founding in 2005, and of the International Group of Unconventional Computing since 2006. Alonso-Sanz has been involved in numerous Spanish-funded research projects, and he is currently involved in the UK EPSRC-funded project "Discrete Dynamical Systems with Memory: A New Tool for Modeling Complexity." In 2008, he co-organized AUTOMATA, the annual meeting of cellular automatists.