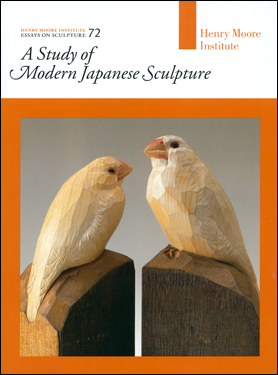 A Study of Modern Japanese Sculpture (Henry Moore Institute: Essays on Sculpture No. 72)

Modern Japananese sculpture' is a topic that has been studied very little in the Western world, and works made in this period (1868-present) are rarely seen outside of their native country.

One of our tasks at the Henry Moore Institute is to look at areas of sculpture studies that are understudied and try to encourage scholarship where there is none. A Study of Modern Japanese Sculpture sets out to begin new dialogues on sculpture between Japan and the UK, introducing what we are tentatively calling 'modern Japanese sculpture' to Britain.

This issue of Essays on Sculpture is bilingual, with both English and Japanese used throughout the journal. Introduced by Lisa Le Feuvre (Head of Sculpture Studies, the Henry Moore Institute), with an in-conversation between Lisa Le Feuvre, Edward Allington (Professor of Fine Art, Slade School of Fine Art, UCL, London) and Sophie Raikes (Assistant Curator (Sculpture), the Henry Moore Institute), and the following essays:

On Medium and Materials: Differing Ideas of Realism
Hirotake Kurokawa (Professor in the Department of Sculpture, Mushashino Art University, Tokyo)

Perspectives on Japanese Sculpture: Infrastructure for Sculptors during the 1910s to 1930s
Shūji Tanaka (Professor, Faculty of Education and Welfare Science, Oita University)